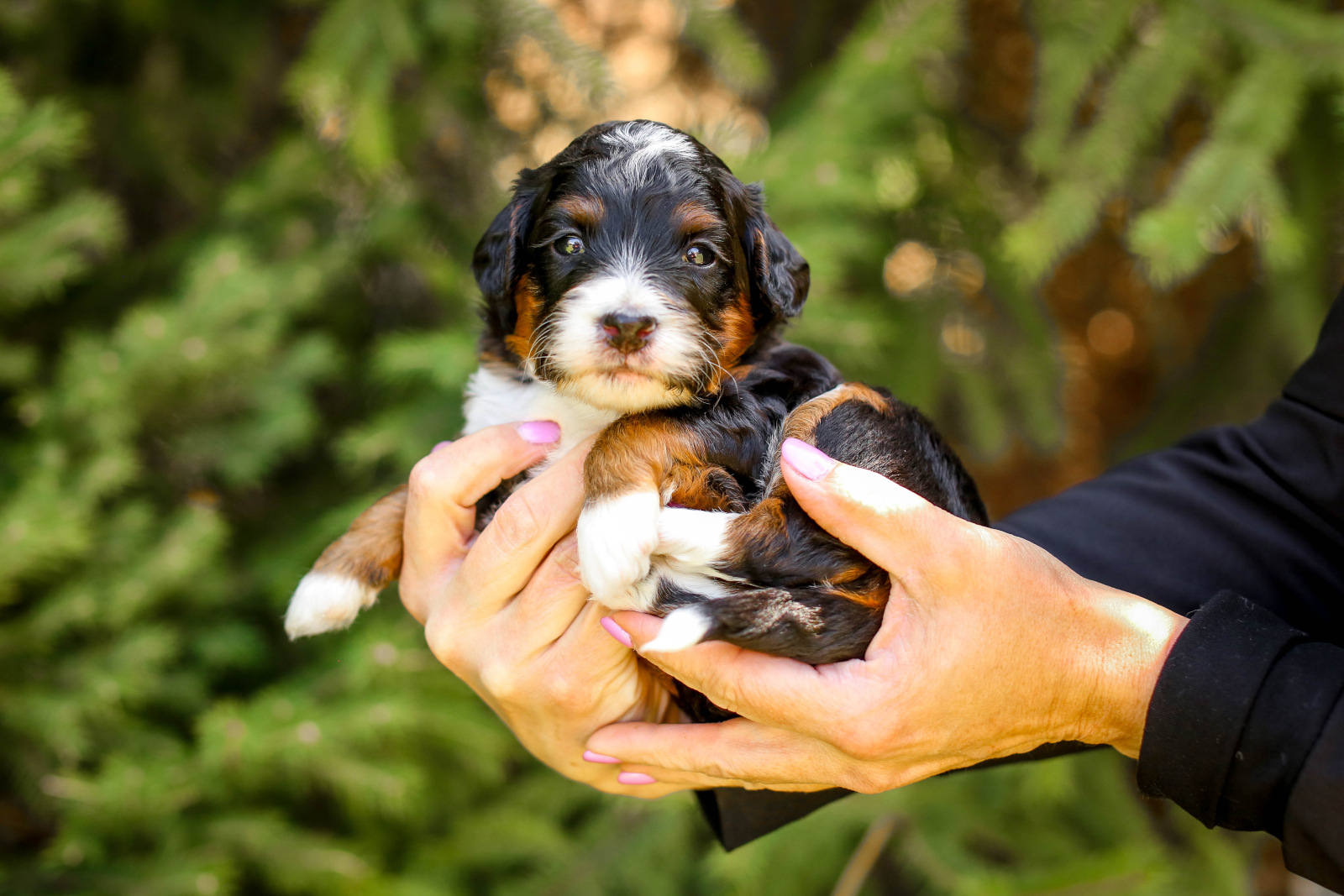 I hold myself to a high standard of ethical breeding practices, and part of that means testing all of my breeding dogs for OFA Hips, OFA Elbows, OFA Eyes (CAER) , OFA Cardiac, OFA Patella and for Genetic Diseases. This ensures that the breeding dogs are healthy, and that the puppies they produce as the healthiest and happiest that they can be.

You can see all the genetic health test results for my dogs on my Paw Print Genetics profile.

Without genetic testing, there's no real way to know if your puppy is at risk for an inherited health condition. There is a general misconception that mixed-breed dogs, such as bernedoodles and goldendoodles, are inherently free of genetic disease. This may be true for disorders that are specific or endemic to a breed (such as Addison's disease in poodles), but the common genetic diseases that are seen across all breeds are seen with the same frequency in mixed breeds. A mixed-breed dog with hip arthritis has no less a case of hip dysplasia than a pure-bred dog. Conscientious breeders, whether of mixed-breed dogs or purebreds, test and label their dogs as dysplastic prior to the onset of clinical signs.

Genetic testing not only helps to ensure that your puppy is healthy, but also allows me to make smart decisions about matching sires and dams to promote the health of the breed overall. Once upon a time, genetic test providers would tell you that a dog with a “carrier” status for a recessive genetic disorder should not be bred. However, the modern view is that we should not exclude dogs from the gene pool based on a “carrier” result for a genetic test. Instead, breeders should use the test to make sure that they breed their “carrier” dog with a “clear” or “normal” mate. In this way, dogs can be bred and we need never observe the disorder in the resulting puppies. The breeder can then test potential offspring to try and keep a “clear” or “normal” breeding replacement animal as soon as is practical. In the meantime, the breeder can ensure that one “clear” animal is used for every DNA test in every breeding.The reality is that forcing people to use animals that are “clear” for every test will place unnecessary pressure on the clear animals, and could lead to an over-representation of their particular genetic traits in the population. The latest research tells us that the damage done to the population by overusing a single popular animal is far worse than the damage done from breeding a carrier animal to a normal mate.

I genetically test my mama and papa dogs for shedding genes, as well as other traits, to ensure that the puppies are actually inheriting the traits we're aiming for (such as having the least likelihood to shed and solid genetic health), rather than just spinning the genetic roulette wheel by guessing that a certain pairing will produce puppies with the desired traits.

We test all of our breeding dogs for health markers to ensure happy, healthy puppies.

Ready to add a furry friend to your family? Apply online to be matched with a puppy.

Look at the puppies!

Our puppies are super cute. You should see them.